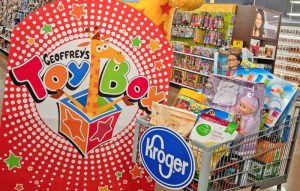 Approximately 600 Kroger-owned grocery stores are getting a familiar face this holiday season.

Geoffrey, the highly-recognized Toys R Us mascot, will bring its collection of brands to the popular grocery chain. Shoppers will once again be able to buy You & Me dolls and Imaginarium play Sets despite Toys R Us’ ultimate failure to reorganize while in bankruptcy protection.

Kroger’s Senior Vice President of Merchandising Robert Clark said, the company is excited to bring the Geoffrey Toy Box so customers can buy the once-exclusive, highly-coveted selection of toys.

The re-introduction of the Geoffrey’s Toy Box and Geoffrey the giraffe will include a mixture of 35 toys, ranging from prices of $19.99 to $49.99. The toys will be on sale at several Kroger-owned grocery stores such as Fred Meyer, Ralphs and Smiths along with the company’s namesake line.

Many retailers are putting more attention on toys to get some part of the $27-billion toy industry after the bankruptcy of Toys R Us. Party City recently unveiled several Toy City seasonal shops, Wal-Mart and Target have increased the size of their toy aisles and FAO Schwarz will open its first store in quite some time.